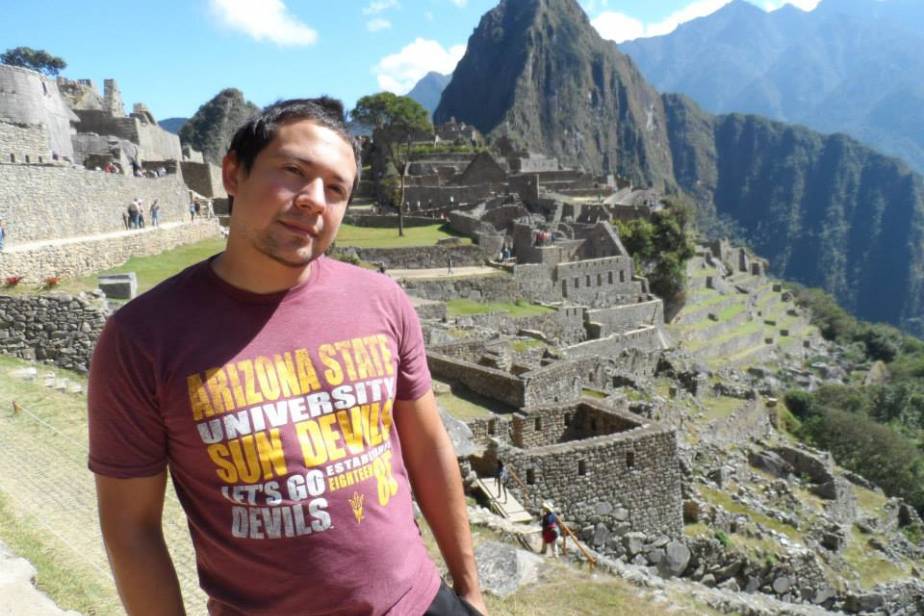 Christopher has always had a lifelong mission of making people smile. Another person's laughter will keep him happy for the rest of the day. Before joining RightThisMinute Christopher interned with 98 KUPD radio and worked for KTVK/KPHO as an editor. He graduated from Arizona State University with a Bachelor's degree in Journalism. While at ASU, he was part of a production team that won an Emmy Award for a documentary film on the Superstition Mountains

An Arizona native, Christopher considers Latin America to be his second home. Outside of a trip to Europe, he has traveled to Mexico, Costa Rica, Panama, Nicaragua, and Peru. Christopher intends to eventually visit all of Central and South America and learn to speak fluent Spanish, Portuguese, and French.

Christopher's ultimate goal is to create his own animated series and be a horror film director.

We've Got Plenty Of Ice For The Party!

These adrenaline junkies set out to boogie on a floating section of ice. They used chainsaws to cut out a chunk, and away they went. Though they had a great time, they wouldn't suggest anyone repeat this stunt. Those guys are not the only ones who enjoy ice time. Marina Korzhenevskaya set up a dance pole on an ice sheet in Russia and put her acrobatic skills to the test.  View Now

This Takes Hoarding To A Whole Other Level

You think you've lived with messy people? The tenant that occupied in this Pennsylvania apartment most likely has you beat. These landlords who recently purchased the apartment were floored when they saw the mess that was left behind during their first visit. This must be what nightmares look like for clean freaks. via ViralHog View Now

Hamilton: An American Musical teamed up with Weird Al Yankovic to produce quite an unusual, yet satisfying rendition of their hit play. We love that all of the cast took part in this wacky choreographed remix. Where could we buy tickets for this kind of an event? View Now

Boy does this kid have a future. Shintara Noble manages her son's YouTube channel Life of Lennox. Here is Lennox rocking out with the band. This protege has outstanding coordination and does a great job changing with the pace of the song. View Now

Adorable Animals Would Rather Be Left Alone

What silly animals! YouTube user Nicolle von Eberkopt shows her pet pig Moritz just not wanting to get out of bed today. Relatable. We've definitely had days like that. Check out this adorable duo. This rottweiler got face to face to with someone way smaller than himself. We'd probably go back inside, too! View Now
END_OF_DOCUMENT_TOKEN_TO_BE_REPLACED

Loulou the mini dachshund is officially a mom! The adorable dog has given birth to six precious puppies, and they couldn't be cuter. It looks like they got it from their mama! You can check out Loulou and her pups on Instagram. View Now

Bird Trapped Inside Church Gets Rescued And Released

When a sparrowhawk was found trapped inside a church in England, the rescue team at East Sussex WRAS was called out to help. After managing to catch the bird despite the building's tall ceilings, they were able to safely release it back into the sky. Now, that's a job well done! View Now

Roxy Signs LadBaby Up To Get Chased By Police Dogs

Mark and Roxy are having fun while attending a dog show... but there's a catch. Roxy took the liberty of volunteering Mark to get bitten by police dogs in a demonstration! While the dogs are going after Mark, the look on his face is priceless. via LadBaby View Now
More animal videos

YouTube sensation David Dobrik is stopping by the First We Feast studios to answer burning questions while eating insanely hot wings. In the latest installment of "Hot Ones," he's talking epic science experiments, crazy pranks, and YouTube stardom with host Sean Evans. Will David be able to brave the spice? Let's find out! View Now

YouTuber Eric Decker is a big fan of David Dobrik and the Vlog Squad. When he found himself wondering how difficult it would actually be to get into one of David's vlogs, an epic plan was born. With the help of a costume, a car with David's face on it, and some crucial connections, Eric's sneaking into one of David Dobrik's Vlogs...dressed as David Dobrik!    View Now
More celebrity videos