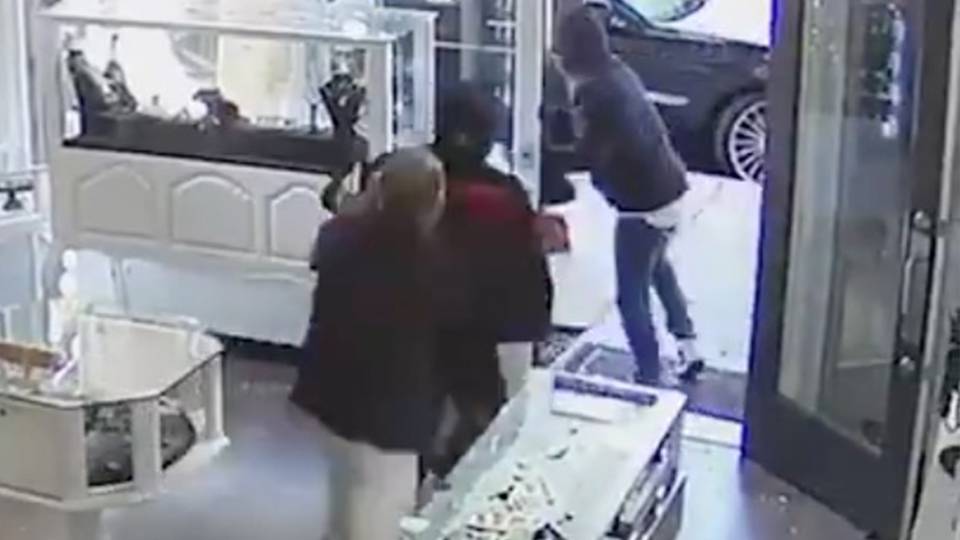 In Santa Monica, two criminals wielding hammers rushed into a jewelry store. One of them smashed a display case with a sledgehammer, but the owner of the store bravely fought back against them using only his bare hands. Incredibly, the two would-be thieves ran off and the store owner was only left with minor injuries.

BRAZEN HEIST: Surveillance footage shows suspects entering a Santa Monica jewelry store, with one of them using a sledgehammer to smash a display case.

The store's owner suffered minor injuries when he attempted to stop the thieves. https://t.co/LqFAR9uDg4 pic.twitter.com/807qg5yavR

Animals Of All Sizes Are Having Family Time

Lots of people enjoy spending time with family, just like these animals in South Africa. First, an adorable elephant calf is acting tough, but his mom teaches him that charging at a tourist vehicle isn't the best idea! via Kruger Sightings Next, a couple of dung beetles are rolling a ball of poop around. Why? They're trying to find a safe place to put it because they have an egg inside of there. This counts as 'family time,' right? View Now

Snakes! Why’d It Have To Be Snakes?!

There's something about living in Australia that makes you immune to the terror of snakes. One woman in Queensland was a lot calmer than we would have been when police showed up to remove a snake that had wrapped around her leg. View Now

Now this is what we call a cat burglar! This stealthy cat has stolen all kinds of items from people all over the neighborhood... and they want their stuff back! Its owner has a basket full of plunder, including 14 pairs of gloves and even a pair of reading glasses! via ViralHog View Now
More animal videos

Pumpkin Juice Might Just Be A New Fall Classic

Move over pumpkin spice latte, there's a new seasonal drink in town: pumpkin juice! Jessica Hord is showing us how easy it is to add more fall flavor to your life by making this refreshing drink. It can be enjoyed hot or iced, and you can even turn it into a cocktail by adding your favorite liquor. Seasonal drinks don't get much better than this! View Now

A burrito pie sounds a tad bizzare, but if you're in the mood for a tasty creation, you have to give this Burrito Pie recipe a try. It's all the fixings of a burrito inside a puff-pastry pie shell! The blend of flavors will leave you craving more, and believe it or not, it's vegan! Recipe via BOSH! View Now

In addition to relying on firefighters for help during emergencies, apparently we can also count on them for great recipes! Firefighters are sharing their best recipes during Arizona Burn Foundation's Cook Like A Firefighter competition, and we have to say, the food they're making looks absolutely delicious. You can get involved by making their recipes and then donating to vote on your favorite dish. View Now
More recipe videos

Many of us have been apart from our loved ones during the pandemic, including Coley Harvey. Coley is a sideline reporter and host who lives in Chicago, and he hadn't seen his parents in months due to the pandemic. After testing negative for COVID-19, he drove all the way to Atlanta to surprise them, and they were excited to say the least! View Now

This Is Your Chance To Meet Soccer Star Alex Morgan!

Alex Morgan is not only an Olympic-level soccer star, she also loves meeting fans. Omaze has teamed up with Morgan to give you a chance to win a meet and greet with her at the United States Women's National Team practice AND a VIP trip to Tokyo! You can enter for your chance to win here. View Now

Dolly Parton Grooves Out To Fans Covering Her Hits

Dolly Parton is a legend, not just in the country music scene but in all of pop culture. And even though Dolly has a new Christmas album on the way, she took the time to check out how her biggest fans have covered her biggest hits on YouTube (much to their surprise). View Now
More celebrity videos

Father Couldn’t Attend Wedding, So Wedding Came To Him

A father who has been battling COVID-19 at a hospital in Israel recently had his first good day in a long while. Because of the virus, he wasn't able to attend his son's wedding. So, his son and his son's fiancée brought the wedding to the hospital. The overjoyed father got to watch the ceremony from his hospital window. View Now

Brandon and Amberell have been married for almost three years, so Brandon decided it was time to upgrade her ring! He hadn't been able to get Amberell an expensive ring when he proposed, but he recently bought a new one that looks like everything she could hope for. While they were at a restaurant, the server brought the ring over to their table, and Amberell looked thrilled! via The DREAM Family View Now

We're big fans of The Holderness Family here at RTM, so we're thrilled that Kim and Penn have written a book! It's about a subject so important to them, yet so personal, hardly anyone could have seen it coming: working on their marriage. It's called "Everybody Fights: So Why Not Get Better At It?" which seems like a pretty valid point if you ask us! View Now
More Love is in the Air videos