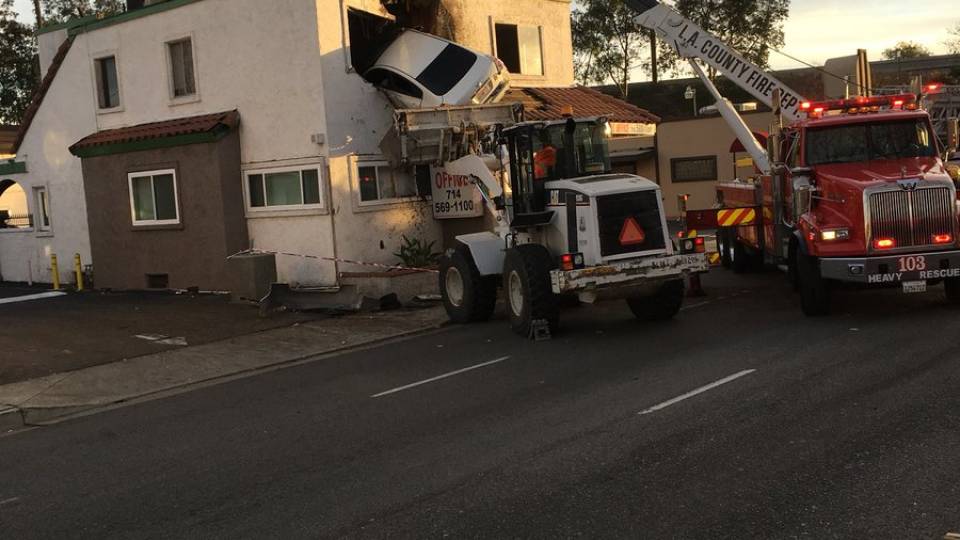 How does it even get up there?! People are scratching their heads after a vehicle went airbourne and slammed into a dental office on the second story of a building in Santa Ana, California. A surveillance video shows how the driver of the white Nissan Altima lost control and crossed three lanes before hitting a center divider and soaring into the air, according to ABC7.

Photos show the precarious position of the car hanging out of the building.

OCFA in Santa Ana of a vehicle that crashed into the building. The fire was quickly extinguished, both victims are out of the vehicle safely with minor injuries. Members from OCFA & LA COUNTY Urban Search & Rescue teams are removing the vehicle from the building. pic.twitter.com/x29WvTkNGk

Dashcam from a bus driving nearby shows a very scary sight!

The driver was arrested and appeared to be impaired after being rescued from the car. A passenger got out of the car unassisted despite minor injuries from a small fire that started.

Get A Taste Of Fall Early With Butternut Squash Gnocchi

KitchenAid UK is making all our gnocchi dreams come true with this mouthwatering recipe. Butternut squash gnocchi with sage butter is the kind of warm comfort food our lives have been missing, and it's easy to make in just a few steps. Grab your KitchenAid mixer and get going — a delicious dish awaits! You can check out the full recipe on their website. View Now

Fit Men Cook has brought us a delicious and healthy alternative to the classic beef burger. The Stuffed Jalapeño Cheddar Salmon Burger is a lean and savory seafood patty, stuffed with melted cheese and jalapeños. This tasty and flavorful burger is best served on a bun with toppings of your choice — or served over a bed of avocado or fresh guacamole! You can get the full recipe here. View Now

DisneyParks brings us a delicious recipe that's perfect for all the beginners out there! The pastry chefs from Disney’s Contemporary Resort are showing us how to make some tasty No-Bake Granola Treats that are as easy to make as they are to eat. Peanut butter, granola and chocolate chips? Now that's a tripple threat. View Now
More recipe videos

We always enjoy featuring Miller Wilson on RTM because he doesn't just go to zoos to see animals; he gets out there and sees them up-close in the wild! This time, the adventurous 17-year-old is going to two different spots in Australia and seeing what kind of wildlife he can find. He ends up rescuing a stringray trapped in a tide pool, swimming with fish, and seeing a huge eel! View Now

When a male lion gets a little too close to a group of lionesses and their cubs, the claws come out. As the lions fight, a group of people on safari have front row seats to the action. Don't mess with these mamas! Staying in South Africa, an unlucky steenbok is on the menu for not one, but three predators. The poor thing can't catch a break as it's pursued by a tawny eagle from the air and two jackals on the ground. But, never underestimate the underdog, because the sneaky steenbok manages to escape them all! View Now

It Wasn't Easy Rescuing This Distressed Dog From A Fence

A dog in India got her head stuck in a fence for eight hours, but fortunately some determined rescuers showed up with lots of patience... and oil. They poured oil on the dog's head, and although it was a tight squeeze, they eventually freed her from the fence so she could reunite with her puppies. View Now
More animal videos

Parris Wright and her family are gearing up for a very special day. Parris' sister Deundra is about to be proposed to by her boyfriend Tay, and the whole family is in on the surprise. Tay's taking Deundra out for a beautiful picnic, but little does she know, it's about to turn into a moment she'll never forget. This one's giving us all the feels! View Now

Amidst all of the chaos in the world, love prevails. Caleb Detken's tear-jerking proposal to his best friend, Shantel, seems like it is straight out of a rom-com movie. View Now

We've featured Michelle Khare on RTM for taking on crazy challenges, but this time it's her man Garrett Kennell who's stepping up to the plate. View Now
More Love is in the Air videos