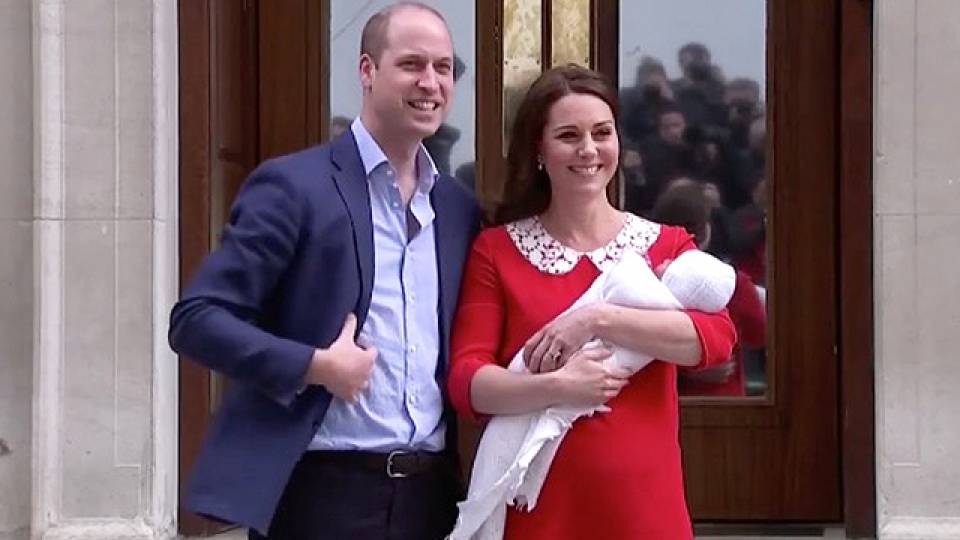 It's a boy! The Duke and Duchess of Cambridge, William and Kate, are the proud new parents welcoming their third child on April 23.

ROYAL TRADITION: A notice of birth goes on display in front of Buckingham Palace following the birth of the Duke and Duchess of Cambridge's third child. https://t.co/9E9v8t4rOr pic.twitter.com/MNDRjk87tZ

A large Union Flag has been raised over Buckingham Palace and a State Standard over Windsor Castle to mark the birth of The Duke and Duchess of Cambridge's third child. pic.twitter.com/hcYYluf2fF

The as of yet unnamed baby joins big brother George and sister Charlotte. The two visited their newest sibling at the hospital with their father in an adorable moment caught on camera.

Crowds formed around the Lindo Wing at St. Mary's Hospital in London waiting for Kate and William to emerge with their newborn.

Princess Kate steps out with Prince William and the newest addition to the royal family. The couple welcomed a baby boy this morning: https://t.co/Ilq1wQh3po pic.twitter.com/4xU7YJE1Tz

Welcome to the family. pic.twitter.com/nKSd5kh5bZ

After grabbing some food, a woman is enjoying a nice stroll through Brighton, England when...AHH! A seagull lands on her shoulder, prompting her to drop her lunch. A bunch of seagulls then flock to the feast, and not one of them has brought their manners! View Now

Everything in Australia seems designed to kill you, even when you're trying to save it. A poor kangaroo got his legs wrapped up in fencing cable when a couple of people came across the distressed animal. Despite the effort to free the kangaroo, it still stood up the first chance it had and got ready to fight. After about an hour, it finally calmed down enough to let the humans pull the cables away. via ViralHog View Now

Humpback Whale, Coming Through! & This Kiteboarder Is Pretty 'Fly'

Patrick and his fiancée Baylee are snorkeling off the coast of Okinawa, Japan when, all of a sudden, a giant Humpback whale shoots out of the water! Now, that's a close encounter. They could have been crushed by that whale, but because they weren't, we're giving this video a 10/10! via ViralHog View Now
More animal videos

Step aside Cupid, Jessica Hord is coming through! She's showing us how to make SugarHero's Love Potion Number 9, aka a sparkling pink drink that looks as good as it tastes. This family-friendly recipe is perfect for Valentine's Day with the kids, or can be paired with a splash of the good stuff for all the cocktail lovers out there. Either way, you can't go wrong with this sweet treat! View Now
More recipe videos

You'll Never Guess How Old This Japanese Pop Star Is

Japanese pop star Seiko Matsuda has had an incredibly successful career, and is even known as Japan's "Eternal Idol" since releasing 24 consecutive number-one singles in just eight years back in the '80s. But, Seiko's music isn't the only thing that's eternal — it appears her youth is, too! Seiko recently released a cover of her hit song "Blue Lagoon," and the singer looks so youthful, people initially thought the woman in the video was her daughter. Nope, it's the 59-year-old herself! View Now

Naomi Campbell's Kenyan Villa Is A Little Slice Of Heaven

Supermodel Naomi Campbell is giving Architectural Digest a tour of her luxury villa in Malindi, Kenya, and spoiler alert: This place is paradise. The beachfront property's open floor plan allows you to feel one with nature without sacrificing on resort-style amenities. Each room features the works of local artists and craftsmen, capturing the true essence of Kenyan culture. If this place was ours, we'd never want to leave! View Now

Welcome to The Goodtime Hotel, where you're sure to have — you guessed it — a good time! Architectural Digest met up with owners Pharrell Williams and David Grutman for a tour of the property, and it's pretty magical. Located in Miami Beach, Florida, The Goodtime Hotel has a unique style that makes it feel both retro and modern at the same time. From the pops of color to the chic decor, this one-of-a-kind spot has us wanting to book a trip to Miami! View Now
More celebrity videos

Man Asks Girlfriend To 'Tie The Knot' While Fishing

When Kacey invited his girlfriend Kait to go fishing, he had a plan. Instead of catching fish, Kacey was fishing for love! He asked her to "tie the knot" while she was untying some fishing line. Now that's a catch of a lifetime! via ViralHog View Now

Lauren and Mitchel are celebrating Easter with their loved ones, so you know what that means — it's time for an Easter egg hunt! Lauren ends up finding all of her eggs first...But the hunt isn't all she's winning. Watch the heartfelt moment Mitchel gives her the most special egg of all: The one with an engagement ring inside! Cheers to the hoppy couple. View Now

Professional singer Zandra has been performing since the age of five, so it only makes sense for her to take the stage on her wedding day! For Zandra, the idea of giving a wedding speech was a little nerve-wracking, so she decided to express herself the best way she knows how: Through song! Watch the heartwarming moment Zandra surprises her husband by performing a beautiful original song, called "We Got Us." You can stream "We Got Us" on Spotify. View Now
More Love is in the Air videos