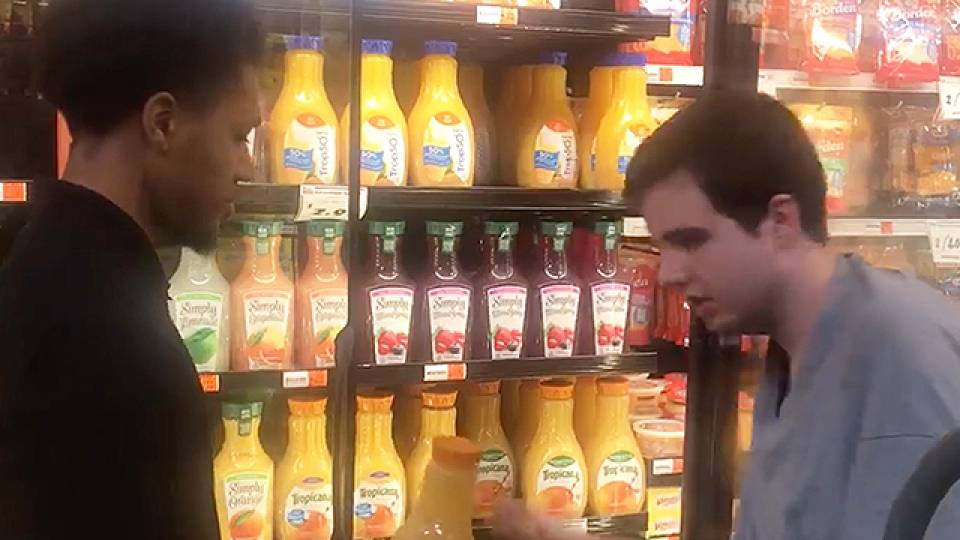 A family wants to help a young man with his dreams of going to school after an amazing act of kindness! Sid Edwards and his 17-year-old son Jack Ryan were visiting a grocery store in Baton Rouge, Louisiana when Jack Ryan became captivated by an employee stocking the shelves. 20-year-old Jordan Taylor was hard at work putting away orange juice and noticed Jack Ryan's interest. Jack Ryan aka Ziggy is autistic, and going out to public places can be difficult, so Jordan invited Jack Ryan to help him with his work.

Sid captured it all on video which was then shared on social media by his daughter Delaney Edwards Alwosaibi.

Jordan told the family he loves math and wants to be a teacher someday, so Delaney set up a GoFundMe page to repay him for his kindness with her brother. A GoFundMe account was also set up for Jack Ryan and brother Chase who also has autism and has been struggling in the real world.

Anyone who thinks it’s too early for pumpkin spice is missing out on a whole lot of deliciousness. View Now

Looking to spice up your palate? Look no further! The cuisine kings and queens over at Delish have an immaculate recipe for jalapeño popper corn dogs. View Now
More recipe videos

There's a lot of excitement at the BirdLife Australia Discovery Centre because a couple of white-bellied sea eagle chicks are finally emerging from their shells. The two chicks, named SE25 and SE26, are different from each other right from the start. One of them is super fuzzy after it hatches and looks ready to take on the world, while the other seems to need a long nap! via Lady Hawk View Now

Guy Couldn't Be Happier About Getting New Kitten For His Birthday

Morgan's birthday party was postponed twice due to COVID-19, which turned out to be a blessing in disguise because it gave his family extra time to put together an amazing surprise for him. They surprised Morgan with an adorable kitten, and you could tell from his emotional reaction that it meant the world to him. His previous cat passed away last year, making life tougher for him because she was his support animal for Asperger's syndrome. It looks like this new kitten will be getting all the love and attention it could ever need! View Now

When you put a GoPro camera near a bird feeder, turns out you can capture some pretty fascinating stuff. Take this guy, for example, who set out some fruit hoping to attract birds, but got an unexpected visit from a hungry bat instead! via ViralHog View Now
More animal videos

Couple Gets Engaged After Revealing The Gender Of Baby Number 4

Ricky and Krystal are expecting baby number four, so they're popping off confetti cannons to reveal the gender. Everyone cheers as the gender is revealed, but that isn't the only surprise in store. Ricky gets down on one knee to propose, and Krystal can't stop smiling as she says yes and jumps into his arms! View Now

After this sweet guy heard the news about his girlfriend testing positive for COVID-19, he was saddened by the thought of not seeing her each day. View Now