Gayle On Film: Latest Releases Are A Must See 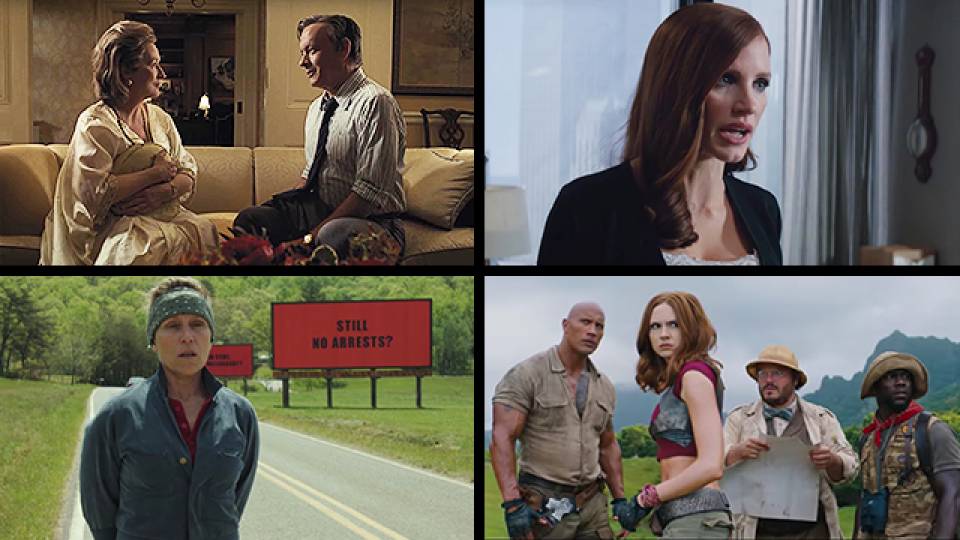 In "The Post," Steven Spielberg aptly documents the First Amendment battle between the Washington Post and the Nixon White House over the release of the Pentagon Papers. Tom Hanks does fine work as editor Ben Bradlee, but the film also leans heavily on the story of publisher Katherine Graham. Meryl Streep embodies the woman who lunches and dines with the people whom opinion columns are written about. In the current cultural moment, it's an interesting look at how Graham grew from that role of hosting dinner parties attended by the Secretary of Defense to then go on to question him about the US role in Vietnam.

Molly's Game: A
Jessica Chastain shines in the film based on the true-life story of Molly Bloom — champion skier turned poker maven. She deliciously handles Aaron Sorkin's snappy and sharp dialogue like a champion skier on a gold medal run black diamond moguls. Bloom comes from a family of academic and athletic champions pushed along by a boilerplate pushy dad (Kevin Costner). An injury forces her from the top of the mountain to waitressing. But it's not long before her strong personality gets her a gig as an assistant for a guy running an exclusive high stakes poker game for A-listers. She ends up stealing his clients, creating her own exclusive game room. Throw in some sketchy Russians and a guy willing to use a REAL Monet as collateral to get into a game and you've got one entertaining film.
Three Billboards Outside Ebbing, Missouri: A-
It's hard to imagine anyone else but Frances McDormand playing Mildred Hayes. Mildred is not particularly happy with the police investigation of the violent murder of her daughter. Her unhappiness leads her to post three billboards asking the chief of police (Woody Harrelson) why there haven't been any arrests. The town isn't particularly on Mildred's side, especially one deputy (Sam Rockwell) who has a reputation of violating the civil rights of black citizens and not being particularly good at his job. The strong language coupled with a mounting escalation of hate between Mildred and the deputy create one watchable tableau from beginning to end.
Jumanji: Welcome to the Jungle: B
The bromance continues between Dwayne Johnson and comedian Kevin Hart in "Jumanji: Welcome to the Jungle." This time, the guys play two out of the four kids who find themselves in detention. While they should be doing some busy work, they find an old video game system and start playing Jumanji. Next thing you know, they're transported into a real-life jungle with entirely new bodies... The nerd winds up with Johnson's rippling muscles. Ironically enough, the football player is now a short weapons bearer for Johnson and the cute girl becomes a heavier-set male explorer played by actor Jack Black. All three excel at playing teens who are just trying to get comfortable in their adult bodies. Yes, the Rock is more like a pebble when it comes to the ladies. The action and comedic banter make this film exactly what it needs to be — FUN!
I, Tonya: B
What was Tonya Harding's role in the events leading up to the Olympics that left Nancy Kerrigan grabbing her knee crying, "Why? Why?" Well, from Tonya's perspective in this film, not much. Margot Robbie delivers a solid performance as the in-your-face, working-class ice skater. She has a difficult relationship with skating judges and a conflicted relationship with her husband Jeff (who is shown as the one to set the Kerrigan plot in motion). Her greatest relational struggle is with her mother, played with award-worthy chops by Allison Janney. In the film, she's seen paying a guy to heckle Tonya to get the best performance out of her. Yes, it's a troublesome relationship. However, the plot to get Kerrigan was remarkably uncomplicated and comical. Beware, the language in this film earns every inch of its R rating but the performances nevertheless earn an "A."