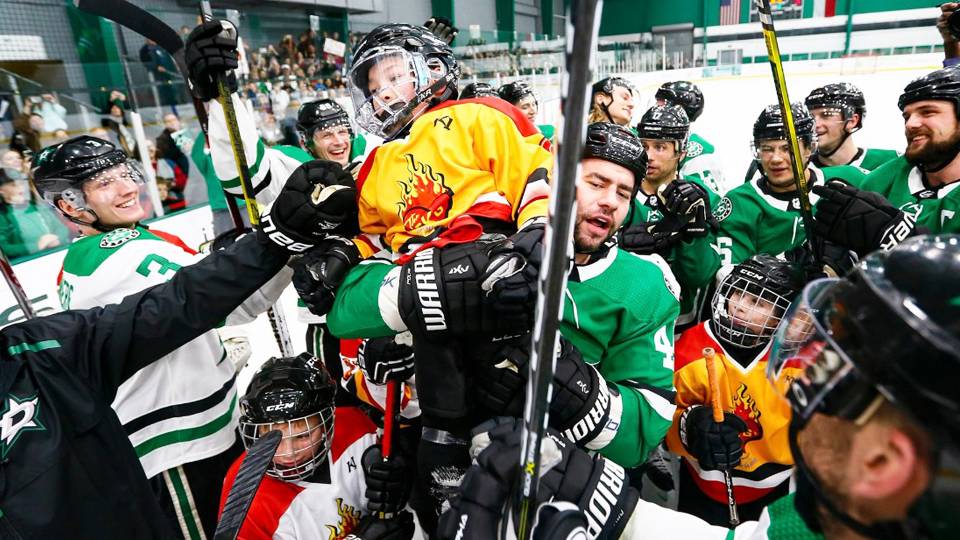 All Anderson McDuffie ever wanted was to play against his favorite hockey team. The two-time heart surgery survivor loves the Dallas Stars, so the team and Make-A-Wish Foundation worked together to make the 10-year-old's dream a reality. (Not to mention he already has an amazing hockey name)!

McDuffie and his teammates the EKG's arrived in style.

The EKG's know how to arrive in style. pic.twitter.com/Dee9ilaf3b

They received their own jerseys and gear.

It's a pretty special day for Anderson McDuffie and The EKG's. The puck has dropped and Stars vs. EKG's is underway! pic.twitter.com/VhAkDwaH9P

McDuffie faced off against Dallas Stars' John Kingberg and scored the winning goal.

Klinger wasn't ready for what Anderson was throwing at him. pic.twitter.com/FAftrymeYG

Anderson McDuffie scores the game-winner and Roman Polak skates him around for a victory lap. Doesn't get better than this. pic.twitter.com/r8JV466Otn

He even got interviewed in the locker room after the game.

Anderson McDuffie on his scrap with John Klingberg pic.twitter.com/oG2XlnBfwX

It was such a special day and sweet moment for all involved!

"Thank you for being the coolest, most awesome NHL team and making my Wish come true. Love, Anderson McDuffie."