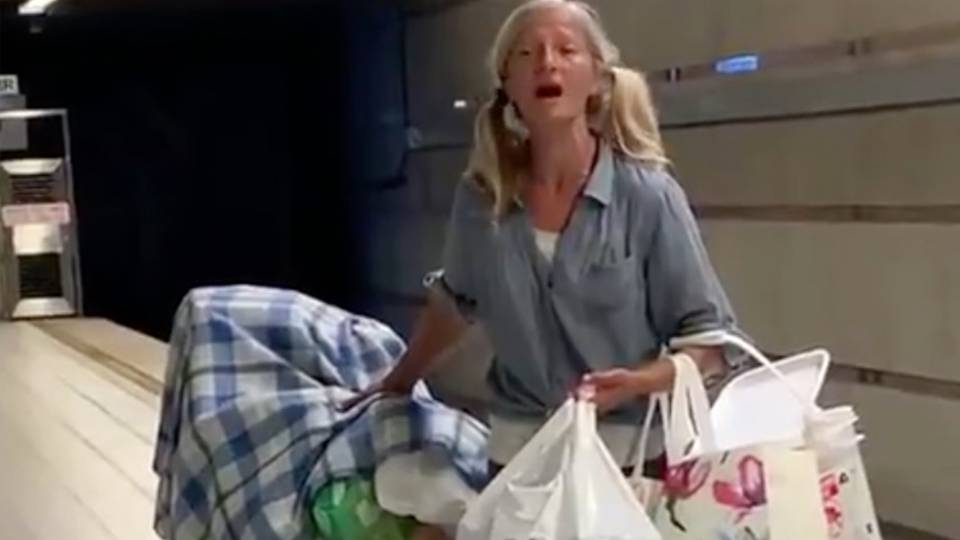 At a subway in Los Angeles, a homeless woman named Emily Zamourka sang a beautiful opera song. The video has since gone viral, getting over one million views since the week it was posted by the Los Angeles Police Department.

4 million people call LA home. 4 million stories. 4 million voices...sometimes you just have to stop and listen to one, to hear something beautiful. pic.twitter.com/VzlmA0c6jX

Emily became homeless three years ago, after a massive amount of medical bills left her in debt. Now she's finally catching a break. Her singing talent caught the attention of the CEO of a record company and he offered her a record contract! Some kindhearted people have also made GoFundMe pages to help Emily out. One of them has raised over $62,000 and the other has raised about $33,000. Emily has since reunited with the police officer who recorded the video of her singing.

We saw with our brains, but we listened with our hearts.

Her voice continues to captivate our city, and as the offers for help pour in, we asked: “Emily, what can we do for you?” Her answer: “I want to thank Officer Frazier for taking the video.”

Her wish was granted tonight. pic.twitter.com/lH4V51YTZ4

Emily seemed so grateful that the police officer helped turn her luck around. The future seems much brighter for Emily now!

Looking to spice up your palate? Look no further! The cuisine kings and queens over at Delish have an immaculate recipe for jalapeño popper corn dogs. View Now

Are you a fan of cheese, and lots of it? Then you're going to love this chicken cordon bleu casserole recipe brought to us by Jessica Hord. View Now
More recipe videos

Sunreef Mooloolaba is the home of Australia’s first swim with whales program, and one of their recent excursions was truly incredible. A beautiful (not to mention huge!) humpback whale swam right up to the tour group, getting close enough for the humans to be able to see it blink! Maybe the whale was just as curious to see them as they were to see it. Either way, what an unforgettable experience! View Now

Giraffes Aren't Holding Back In This Intense Battle For Dominance

In South Africa, it's a dominant male giraffe vs. the new giraffe on the block as they literally go head-to-head. The dominant giraffe gives it everything he's got and forcefully lands blow after blow on the newcomer. The younger giraffe won't give up without a fight, but after getting knocked down twice, it's clear that he has to accept defeat. View Now

We always enjoy featuring Miller Wilson on RTM because he doesn't just go to zoos to see animals; he gets out there and sees them up-close in the wild! This time, the adventurous 17-year-old is going to two different spots in Australia and seeing what kind of wildlife he can find. He ends up rescuing a stringray trapped in a tide pool, swimming with fish, and seeing a huge eel! View Now
More animal videos

Love is in the air during Spencer and Amanda's wedding reception... and so is a drone! View Now

Parris Wright and her family are gearing up for a very special day. Parris' sister Deundra is about to be proposed to by her boyfriend Tay, and the whole family is in on the surprise. View Now

Amidst all of the chaos in the world, love prevails. Caleb Detken's tear-jerking proposal to his best friend, Shantel, seems like it is straight out of a rom-com movie. View Now
More Love is in the Air videos