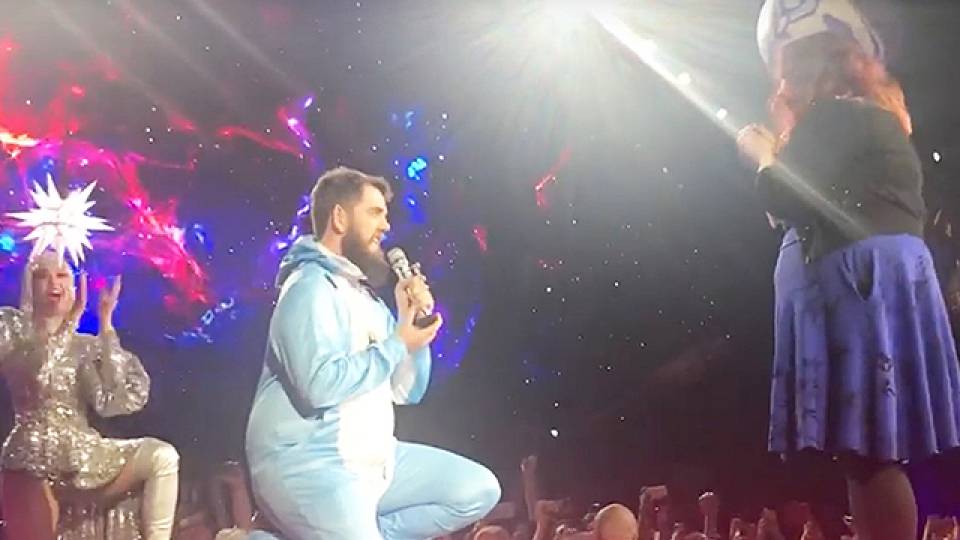 How do you shower a Katy Perry superfan with some love? Propose to her at one of Katy's shows with the singer's assistance! That's exactly what Grant Alexander did for his now fiancé Stephanie Chin. Stephanie has been following Katy around the world during her Witness: The Tour series and was in Auckland, New Zealand on this fateful night. Grant had told Stephanie he was in Melbourne, Australia, but he secretly arrived in the city before the concert, according to The New Zealand Herald. Grant got to go backstage and meet Katy, and the singer also gave him a Left Shark costume to put on. During the show, Katy "randomly" picked him to come on stage and asked if he wanted to bring anyone up with him.

ARE YOU FUCKING KIDDING ME? @XANDER85 & I ARE ENGAGED AND @KATYPERRY WAS IN ON IT THE WHOLE TIME. pic.twitter.com/VughOYUErt

#MyWitnessEra has been incredible. Witnessed 8 shows; x1 Bangkok, x1 Adelaide, x3 Melb (M&G) x1 Syd & x2 in Auckland. I've made so many friends this era and at the final show @xander85 proposed to me! I am so grateful to @katyperryforum and @katyperry. My heart is so full. pic.twitter.com/krI89ji3Pt

THANK YOU TO @lilithia!! The love of my life and fiancé AHHHHHHH!!!
I’m still just as shook as you are that it was such a successful surprise! I can’t believe @katyperry did this for us! I LOVE YOU STEF

Congratulations to a couple of KatyCats and a very sweet couple!

If our watches are correct, then it's time for Zookeeper Beth to feed and play with the meerkats! via Symbio Wildlife Park View Now

Rosie the dog has never seen a turkey...until now. Watch the hilarious moment the two animals interact the best way they know how: With a lot of barks and gobbles! via English Sprocker Spaniel Dogs View Now

Farmer Derek noticed a pair of bald eagles flying around one of his trees. He did some investigating and soon enough found out the eagles were a couple and they had a nest! Derek was as excited as any one of us would be, so he decided to set up a live streaming camera so anybody can watch the eagles and their little family. Go to farmerderek.com to watch the live cam! View Now
More animal videos

Penn's Wife Is Mad At Him, So He's Singing It Out

When in doubt, sing it out! The hilarious Penn Holderness is back with another original song, this time called "Reasons Why My Wife Is Mad At Me." We feel you, Penn... and Kim — we feel you, too. Relationships may have their ups and downs, but at least we've got The Holderness Family to keep us laughing! View Now

Did you hear? Wedding bells are ringing! At the end of last year, Janessa Yumul's now fiancé thought of a super creative idea to profess his love to her and pop the question. With the help of some friends, Janessa was taken to different places around Vegas that are meaningful to her and her fiancé, each place getting her closer to the unexpected. View Now

Gustavo and Samella are very much in love, and back in August, they did a photoshoot with Thibecs Productions. The folks at Thibecs thought that Gustavo would propose then, but he held back. Instead, he waited until he could set up another photoshoot, this time with the intention of proposing to Samella on the famous steps featured in the movie "Rocky." View Now
More Love is in the Air videos