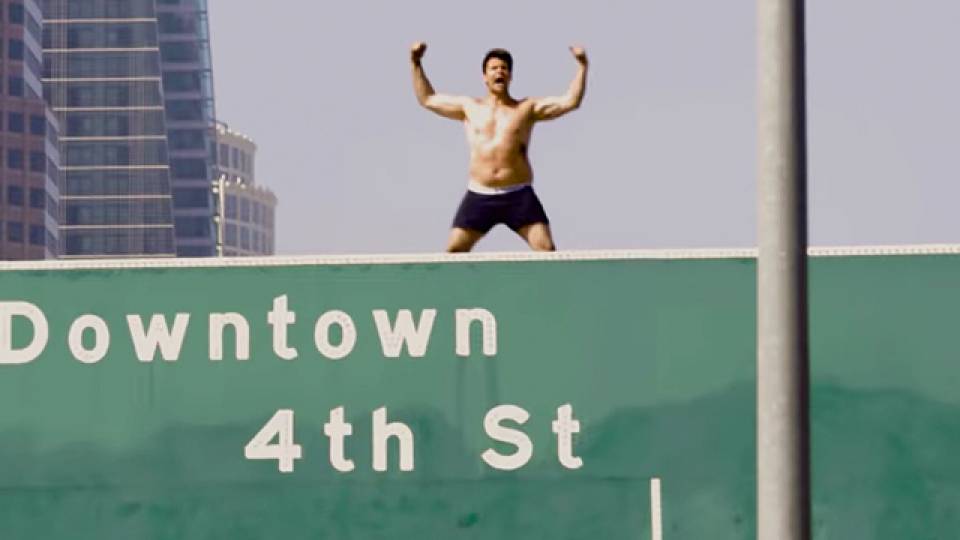 Just how far will people go for publicity especially in the entertainment capital of the world? Aspiring rapper and goofball Dephree is now known to the world after holding up downtown Los Angeles traffic for two hours after climbing up on an exit sign, vaping, dancing, shouting into a bullhorn and putting up banners, according to the LA Times. Not to mention he was just in boxers.

WHEN YOURE ALMOST LATE TO WORK BC A MAN IS DANCING ON THE 110 SOUTH. pic.twitter.com/ULhZMVa9bZ

I was SUPER late to work today because of you! Not fun, but I’ll forgive you, because of the back flip ending.

Police and firefighters rushed to the scene and finally got a hold of him after Dephree did a backflip off the freeway sign and into an inflatable cushion.

Dephree has just done a backflip of the sign. pic.twitter.com/d5qh6qybQ6

Dephree is officially out on bail. We are uploading the music video right now. Stand by.

It turns out, the entire stunt was being filmed for new music video which conveniently came out Thursday.

He's definitely succeeded in getting both lovers and haters to know his name!

If you're looking for your new favorite summer snack, look no further than this cheesy corn poppers recipe from Delish. View Now

Start Your Day Off Right With A Mashed Potato Breakfast Burrito

You know it's going to be a glorious day when you start off by making a breakfast burrito. View Now

A Frozen Watermelon Margarita Is All You Need This Summer

Looking for the perfect drink to sip on this summer? Delish has a recipe for watermelon margaritas that's both delicious and refreshing. We wouldn't mind sitting by the pool with this drink in our hands! View Now
More recipe videos

Aurora the pup and her sister Vienna were living in dismal conditions at a puppy mill when they were rescued by the National Mill Dog Rescue. Afterwards, the team treated each of the dogs to a much-needed makeover to get rid of the dirt, grime, and matted hair that had built up on them as a result of their mistreatment. View Now

Greenskeeper And Robin Are Birds Of A Feather

Rio the robin and Adam aren't your typical pair of friends, but they're practically inseparable. Adam's a greenskeeper at a golf course and befriended the little bird while he was working. Now Adam can whistle a tune to call his BFF over to him, or feed the bird with his hands and mouth! View Now

This incredible footage shows thousands of flamingos making a pit stop on their migration path at a wetland in Mumbai. When you gaze out over the region, it looks like a sea of pink. How fascinating! View Now
More animal videos

Ricky Gervais Gives Us The Lowdown On British Slang

Ricky Gervais is (virtually) sitting down with Vanity Fair for a "chin wag." Sure he's pretty busy writing, producing, directing, and starring in his hit show "After Life" on Netflix, but he finds time for the occasional "bevvy." He's a bit "cheesed-off" about having to postpone some gigs, but if he hadn't, things could have turned out "shambolic." Don't know what any of these terms mean? View Now

Like many of us, Bon Appétit's awesome cooking challenge series "Back-To-Back Chef" is also adapting to COVID-19 with "Side-By-Side Chef." In this at-home episode, singer-songwriter Troye Sivan is taking a crack at making some delicious Japanese pancakes. He has to follow chef Carla Music's verbal instructions only, but the question is, will he be able to pull it off without peeking at their video chat? Let's find out! View Now

Salons have been closed temporarily during quarantine, so Molly Sims and her son Brooks are taking matters into their own hands. Brooks is helping her wax at home, but it seems much more intense than he expected! After helping his mom pull off the wax strip, Brooks' reaction is so sweet. View Now
More celebrity videos

Can This Woman Get Online Dates While Posing As Her Male Friend?

Alexander Grace and his friend are doing an experiment to see how different the online dating experience is for men and women. Alexander's friend makes an online dating profile for him, then she tries to get dates while undercover as a man. Will she be able to easily find dates since she knows what women want, or will it be more difficult than she'd imagined? View Now

Brooke and Josh are enjoying a lovely painting date they'll never forget. Why? Because Josh is proposing! View Now

Popping The Question On A Beautiful Island Vacation

Rodney and Nath almost didn't go on their vacation to Grenada due to COVID-19 travel restrictions...almost! View Now
More Love is in the Air videos