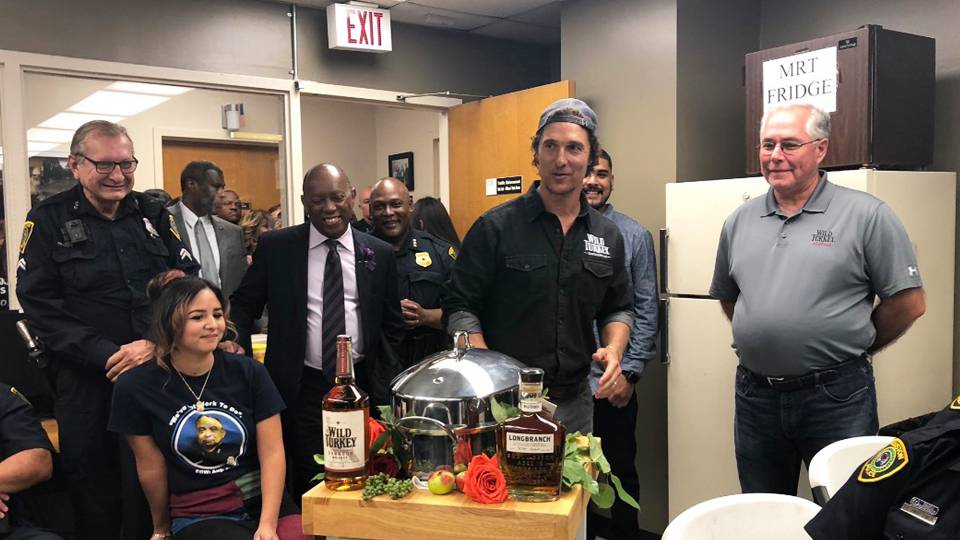 It's always nice when a celebrity gives back. With their unlimited resources and ability to draw the attention of fans and the press, it's a no brainer, and Matthew McConaughey is well known for his good deeds. Last year, the actor along with Wild Turkey gave out free turkeys to families on his birthday, and this year he's honoring the heroes of 2017's Hurricane Harvey in his home state of Texas. On "National First Responders Day," McConaughey snuck up on some unsuspecting firefighters.

Thanks Matthew McConaughey for swinging by HFD Station 26 and for teaming up with Wild Turkey to show appreciation to Houston first responders! #WildTurkeyGivesBack pic.twitter.com/9pZsI4S8Oz

He also stopped by the Houston Police Department, bringing officers a turkey lunch.

Matthew @McConaughey teamed up with @WildTurkey to give back to Houston’s heroes.

Honored to welcome him to our city and thank him for spending time and recognizing our @houstonpolice, @HoustonFire, and 911 dispatchers for their service. #WildTurkeyGivesBack #HoustonStrong pic.twitter.com/LQZ5vk11Jc

In addition to his surprise visits, McConaughey donated to Team Rubicon, a disaster response organization that deploys veterans and first responders to communities affected by natural disasters, according to KTRK. His Facebook live video above at the fire station also encouraged 43 people to donate almost $4,000.