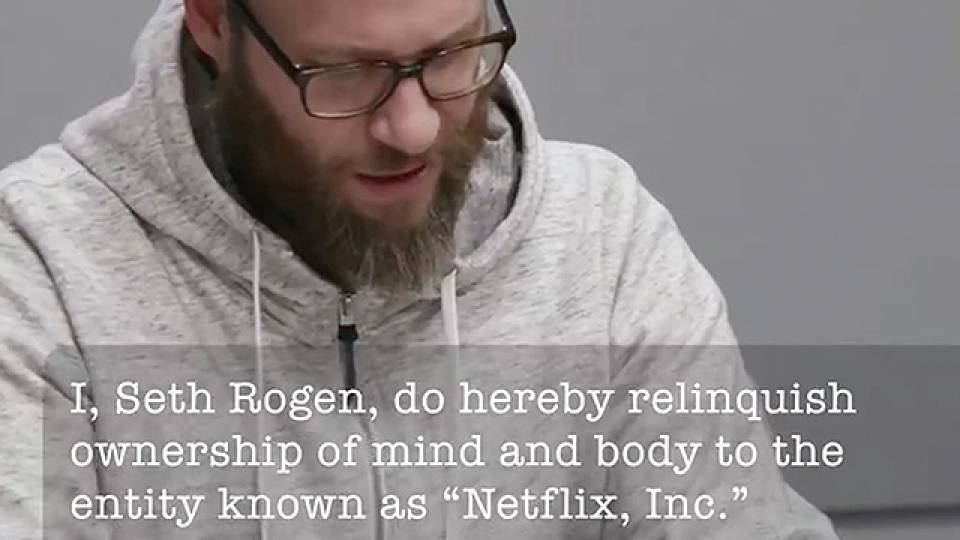 If you're one of those people who mindlessly scrolls through social and news, you might have gotten fooled. Netflix tried to pull a fast one on everyone Sunday changing their Twitter cover photo to say "Netflix Acquires Seth Rogen" and tweeted out a very important announcement.

The hilarious video shows Seth reading through his new contract which includes Netflix gaining control of his body and pretty much everything else in life. The first project was creating a Seth Rogen laugh track although we're guessing it's all part of the prank.

Stop everything and turn your sound on for this announcement ‼️ pic.twitter.com/7wqsdAwo5J

Don't worry if you're disappointed this all isn't for real. Seth is actually really coming to Netflix in the form of his new comedy special "Hilarity for Charity."

Having a friendly encounter with an animal is one of the most exciting things that can happen at sea, and these humans hit the jackpot! From taking a selfie with a gray whale and getting a special show from a calf to witnessing a dolphin stampede — these experiences are ones for the books. View Now

Darius Sasnauskas of the honeysada YouTube channel is a true bee lover! Being amidst a giant swarm of honey bees would scare the lights out of most people, but Darius welcomes them with open arms — and in this case, with no protective gear. He says these bees actually aren't very aggressive during the period in which they're looking for a new home, so he's helping them relocate since their other hive got too big. It's not an easy job, but Darius does it well! View Now

Surprise Tiger! & Up Close With An Elephant

When you visit a wildlife park, you always hope to encounter wild animals in their natural habitat. What you don't always consider is that sometimes the wildlife isn't so keen on you being there. A group of tourists got a scare when a tiger leaped from the bushes. Luckily, the tiger ran off without harming anybody, but we'd definitely need to change our underwear after that encounter. View Now
More animal videos

Step aside Cupid, Jessica Hord is coming through! She's showing us how to make SugarHero's Love Potion Number 9, aka a sparkling pink drink that looks as good as it tastes. This family-friendly recipe is perfect for Valentine's Day with the kids, or can be paired with a splash of the good stuff for all the cocktail lovers out there. Either way, you can't go wrong with this sweet treat! View Now
More recipe videos

Welcome to The Goodtime Hotel, where you're sure to have — you guessed it — a good time! Architectural Digest met up with owners Pharrell Williams and David Grutman for a tour of the property, and it's pretty magical. Located in Miami Beach, Florida, The Goodtime Hotel has a unique style that makes it feel both retro and modern at the same time. From the pops of color to the chic decor, this one-of-a-kind spot has us wanting to book a trip to Miami! View Now

Shaquille O'Neal was in a Zales when he overheard a timid young man talking about putting an engagement ring on a layaway plan. It turns out that the man was in the right place at the right time! The former NBA-star-turned-sports-analyst didn't hesitate to cut in and insist that he pay off the ring for the man. His act of kindness was caught on video and shared on Instagram. View Now

For millions of fans, the FX smash hit series 'Mayans M.C.' is an obsession! It recently returned with its third season, under the watchful eye of co-creator, executive producer and director Elgin James. Now, he and director of photography Vanessa Joy Smith are giving us a behind-the-scenes look at how they capture a feeling while crafting a show. View Now
More celebrity videos

Professional singer Zandra has been performing since the age of five, so it only makes sense for her to take the stage on her wedding day! For Zandra, the idea of giving a wedding speech was a little nerve-wracking, so she decided to express herself the best way she knows how: Through song! Watch the heartwarming moment Zandra surprises her husband by performing a beautiful original song, called "We Got Us." You can stream "We Got Us" on Spotify. View Now

Mayday! We Have A Proposal!

Chad Milton is a flight instructor, so his girlfriend Briana is joining him in the cockpit so he can practice some of his teaching techniques. But, when the pair finds themselves in a dangerous situation mid-flight, Chad asks Briana to read him the emergency checklist. View Now

It might have been Harley's wedding day, but sister and Maid of Honor Haley had something special to reveal as well. So the pair played a game during the reception. It was one of those games where you see how much you know about the other person. Well, it turns out both of them knew friends and family alike would be surprised to learn that both sisters were pregnant at the same time! View Now
More Love is in the Air videos