SpaceX Announces First Passenger To Go To The Moon 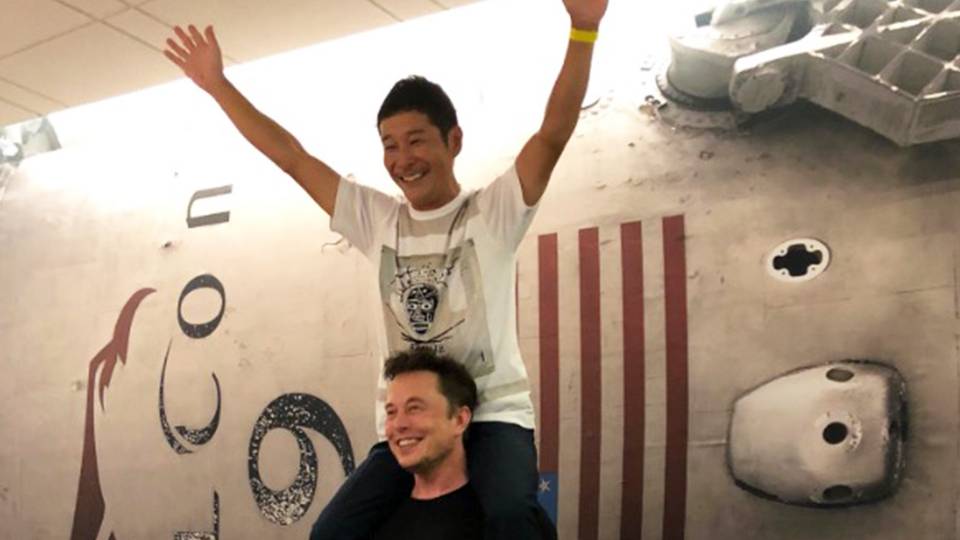 Until now, SpaceX rockets haven't had any private passengers, but that could change by 2023. The company just announced that Japanese billionaire Yusaku Maezawa is to be the first to fly to the moon on the Big Falcon Rocket.

SpaceX has signed the world’s first private passenger to fly around the Moon aboard our BFR launch vehicle—an important step toward enabling access for everyday people who dream of traveling to space. Find out who’s flying and why on Monday, September 17. pic.twitter.com/64z4rygYhk

Hanging out with @yousuck2020 before the @SpaceX moon mission announcement pic.twitter.com/RTOwutzMtG

Art-lover Maezawaka will bring artists along with him, according to ABC News.

"If Pablo Picasso had been able to see the moon up-close, what kind of paintings would he have drawn?” https://t.co/oNU1mAho8q pic.twitter.com/I17dJXy9JZ

If Pablo Picasso had been able to see the moon up-close, what kind of paintings would he have drawn? If John Lennon could have seen the curvature of the Earth, what kind of songs would he have written? If they had gone to space, how would the world have looked today? People are creative and have a great imagination. We all have the ability to dream dreams that have never been dreamt, to sing songs that have never been sung, to paint that which has never been seen before. I hope that this project will inspire the dreamer within all of us. Together with Earth's top artists, I will be heading to the moon... just a little earlier than everyone else. I am truly blessed by this opportunity to become Host Curator of “#dearMoon”. I would like to thank Elon Musk and SpaceX for creating the opportunity to go around the moon in their BFR. I would also like to thank all those who have continuously supported me. I vouch to make this project a success. Stay tuned! *** パブロ・ピカソが月を間近に見ていたら、どんな絵を描いたんだろう。 ジョン・レノンが地球を丸く見ていたら、どんな曲を書いたんだろう。 彼らが宇宙に行っていたら、今の世界はどうなっていたんだろう。 私たちには、想像力と創造力があります。 まだ一度も見たことのないような夢を見ることができるかもしれない。 歌ったことのないような歌が歌えるかもしれない。 描いたことのないような絵が描けるかもしれない。 このプロジェクトが皆さまの夢を拡げるきっかけになることを願っています。 地球を代表するアーティストと共に、皆さまより少しだけお先に月に行ってきます。 #dearMoonホストキュレーターとして、このようなチャンスに恵まれたことを大変誇りに思います。 BFRでの月周回飛行プログラムを提供くださるイーロン・マスクさんとSpaceX社の皆さま、そしていつも僕を支えてくださる全ての関係者の皆さま、本当にありがとうございます。 このプロジェクト必ず成功させます。 楽しみにしていてください！ *** @dearmoonproject #dearmoon

However, this isn't the first time SpaceX has said paid passengers would be going into space. Founder Elon Musk had earlier announced two people had put down a deposit to fly around the moon in the smaller Falcon Heavy rocket some time this year, but in June it was confirmed that wasn't happening. Here's hoping Maezawaka will get his chance and share his experience with us. So cool!