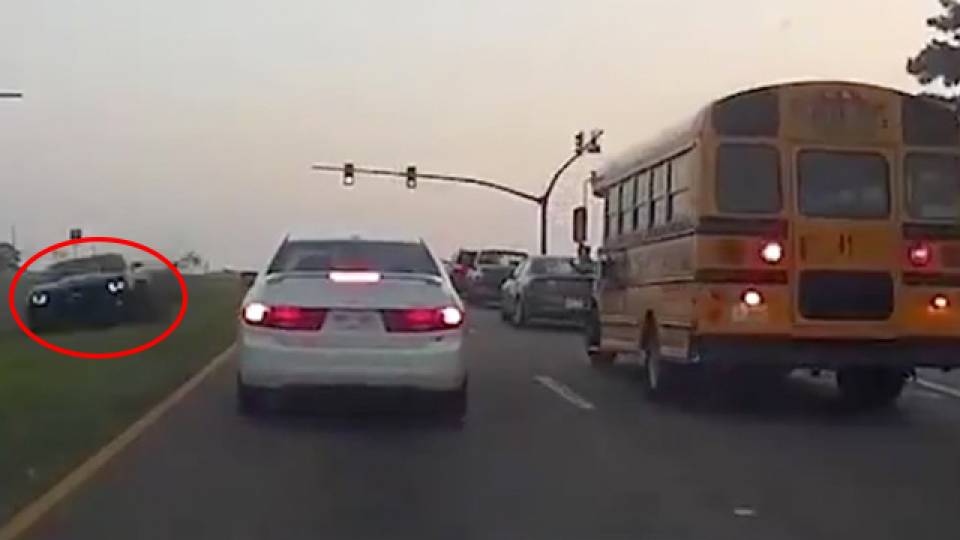 Car accidents are always frightening and shocking, but we really don't think there was any way drivers could have seen this coming! Dashcam footage captured the scary moment when a Camaro flew across a median in Pearl, Mississippi, right into a school bus. The sports car was being driven by 24-year-old Erik Payton who was arrested for having no insurance, according to WLBT. Luckily, there were no students on board the bus at the time, but a mother and child in another car were taken to the hospital.

Dashcam footage captures car speeding across a median, then flipping into a school bus after hitting another vehicle.

"The bus had not picked up any students and the injuries were minor in the incident," police say. https://t.co/aaXjZuhiym pic.twitter.com/Sp5Bj4iK1K

Sea turtles are just the coolest. We love watching new footage of sea turtles, and this video from Atsushi Sadaki is just neat. It must be odd from the perspective of the sea turtle that a human scuba diver finds it so interesting to watch him snack on a coral reef. Imagine seeing a scuba diver watching you grab a midnight snack. Sure it would be strange, but we would just keep snacking too. View Now

When Pups Reunite With Their Soldiers

Brewster boarded at Bush Animal Clinic in Albany, Georgia for 181 days but spent 270 days away from his momma Makesha while she was overseas serving with the National Guard. After all of that time away, it was like nothing changed when they finally reunited! Let the cuddles begin! Speaking of soldier/dog reunions, check out the moment that Golden Retriever Penny reunited with her human. When Jonathan Wigington arrived home from a seven month deployment, the zoomies from Penny began. All the treats in the world couldn't get her more excited than this! View Now

Roof Gets Goated & Drop The Egg And Scramble!

Tell us how many times you've heard this one before. You come home from a hard day of work only to find goats on your roof! Oh, that's never happened to you? Well, that's exactly what happened to a social worker when she found her goats had escaped from their pen and hanging out on the roof. Hey, at least they're scaring away the birds! via ViralHog View Now
More animal videos

What could be more important to a bride and groom on their wedding day than the wedding itself? If you're Jessica Jester and Kevin McCarthy, then keeping up on the University of Cincinnati vs Notre Dame score is right up there. Their friend Adam Billiter paused during his officiating of the wedding to update the couple on the score. Hopefully, there isn't a Bearcats game during the birth of their first child. View Now

Will You Marry Me Or Nah? & The One That Didn’t Get Away

Rapper, songwriter, producer Yung Gravy only stops his live shows for the most important reasons, and marriage proposals are right at the top of the list. Yung Gravy asked the crowd to quiet down a little so he could read aloud Chris's proposal to his girlfriend Cat. Needless to say, this proposal was a real show-stopper! View Now
More Love is in the Air videos