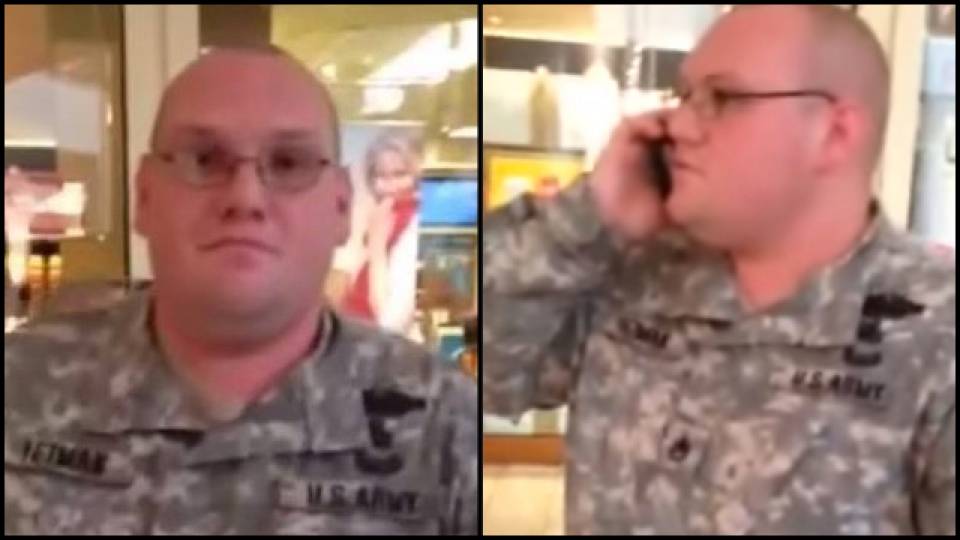 The man at the center of the Stolen Valor video that quickly went viral has actually gotten himself into similar hot water before, according to police reports recently obtained by the Bucks County Courier Times. Sean Yetman, who on Black Friday was confronted and accused of wearing Army fatigues in public when he didn't actually serve, was once arrested for impersonating a fallen police officer.

In 2003, Yetman was arrested while wearing the coat of a Philadelphia police officer who died in the line of duty, according to police reports obtained by the Courier Times. He pleaded guilty in May of 2003 to impersonating a public servant, which is a second-degree misdemeanor. He was also driving with a suspended or revoked license, according to the court records.

Flash forward to this past Black Friday. Ryan Berk, a Purple Heart recipient who was wounded by shrapnel in 2010 while fighting in Afghanistan, saw what he thought was a fellow member of the United States Army while shopping in a Pennsylvania mall on Black Friday. But after watching the man in uniform interact with other people and seeing some faults in the uniform, Berk approached Yetman and verbally dissected him for the inconsistencies in his uniform. After Berk sent the video to Stolen Valor, it picked up steam. A Pennsylvania congressman contacted the U.S. Attorny's Office about the video and the alleged imposter.

Yetman's misdemeanor from 2003 wouldn't have kept him out of the Army, but according to the National Infantry Association at Fort Benning, GA., Yetman doesn't appear in the U.S. Army's database, meaning he's not active duty or recently retired. His name also isn't found in any database of the Army members who have undergone Ranger training at Fort Benning.

Yetman deleted his Facebook account the day after the video went live, and has reportedly lost his actual job (it's not clear what that job was). He has still not been charged with a crime, though he is being investigated.

Adrienne Lally, Yetman's reported fiancé, told the Army Times via email that he and his family (including his children) have been receiving death threats. Lally maintained that Yetman didn't receive any discounts on Black Friday, which at this point is just a minor part in the whole story.

Here's the original video from the Black Friday confrontation. Warning, there is some adult language.

And here is Berk's response on Fox and Friends, giving some insight as to how the original video happened:

This isn't your typical firefighter rescuing a cat from the top of a tall tree. This perhaps, is a bit more dangerous. Because you know what they say, watch out for the snakes in the grass. In this man's case, he spotted a snake tangled in a net. After some meticulous cutting, he freed the snake, leaving it to slither another day. via ViralHog View Now

Sam was curious about why her boyfriend Luke asked her to meet him at the spot where they first met until she got there. Luke cast their friends and family to play versions of themselves from the start of their relationship to nowadays. Sam was overcome with emotion as the pair literally walked down memory lane. At the end of the path was the spot where they would make a new memory. Luke got down on one knee and proposed. This is one of the most unique proposals we've ever seen on RTM! View Now

Christina and Jakob have been dating for six years, most of those years were done long-distance because Christina is from the United States and Jakob is from Denmark. On January 11th, 2022, they finally got engaged! Here, they captured the ecstatic reactions of friends and family as they shared the news! Congratulations, you two! View Now
More Love is in the Air videos