Suspect Ejected Out Of Cop Car Back Window After Escaping Handcuffs 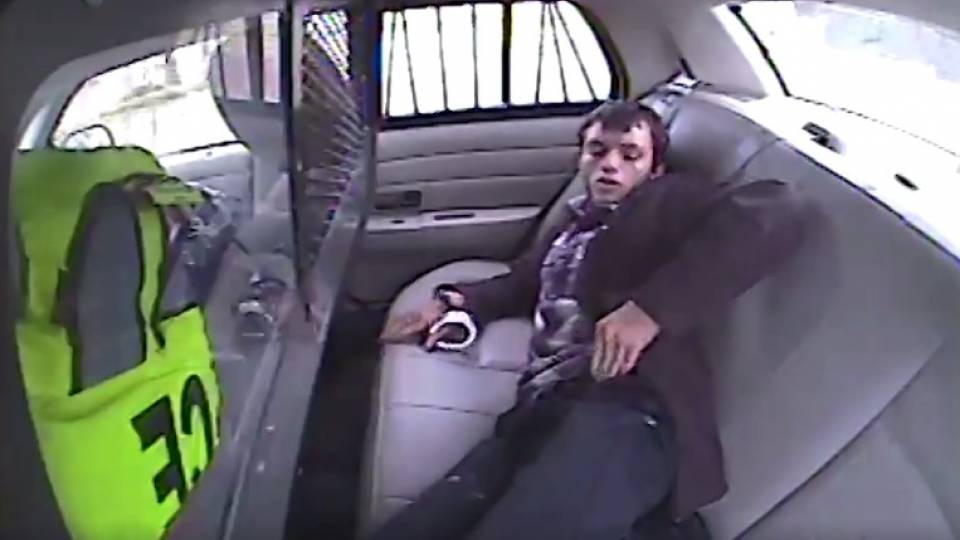 The dashcam of a police officer's cruiser in Jonesboro, Arkansas captured this shocking footage.

The footage shows the suspect getting out of his handcuffs and taking what appears to be a lighter from his pocket. Suddenly, the 19-year-old suspect Logan Younger was thrown out of the back window of the police cruiser after the car was involved in an accident.

A witness saw the suspect running from the scene and shared the video on her Facebook page.

The police officer became trapped inside of the vehicle but was rescued by firefighters.

The police officer was then flown to the hospital where he is being treated. The suspect was also taken to the hospital, but is now in a Detention Center being held on charges of escape, public intoxication, fleeing on foot, and minor in possession.

Fox And Eagle Duke It Out Over Dinner

A fox and a golden eagle are fighting over an animal carcass in the mountains of Avila, Spain, and photographer Guillermo Arteaga has a front-row seat to the action! We're not sure who will come out on top...but we do know Guillermo sure is brave for getting close. View Now

Watch Out For Runaway Cars...Oh, And Bears!

Unusually cold weather recently wreaked havoc across Texas, blanketing streets with snow and ice. While Jake here was unloading his car at a friend's house, he forgot to put the emergency brake on...which resulted in his car sliding down the driveway. Luckily, Jake's Ninja-like reflexes kicked in just in time to retrieve the car before any damage was done. And that's how you turn a fail into a win! View Now

A poor pooch in Spain got its head stuck between some rocks, so it's humans to the rescue! With a few power tools and a whole lot of patience, the rescuers manage to gently free the little guy. We can't imagine how uncomfortable that must have been! And the doggie rescues continue as firefighters in China rappel down a sewer filled with rushing water to save a Labrador. They're able to reunite the dog with its human in no time, and the sweet pup seems so grateful for their help! View Now
More animal videos

Step aside Cupid, Jessica Hord is coming through! She's showing us how to make SugarHero's Love Potion Number 9, aka a sparkling pink drink that looks as good as it tastes. This family-friendly recipe is perfect for Valentine's Day with the kids, or can be paired with a splash of the good stuff for all the cocktail lovers out there. Either way, you can't go wrong with this sweet treat! View Now

This Chorizo Queso Dip Will Make The Crowd Go Wild

Here at RTM, we can always count on Jessica Hord to deliver the goods! This time, she's whipping up I Heart Naptime's Chorizo Queso Dip just in time for the big game. No matter which team is winning, everyone can come together to enjoy this mouthwatering snack. Quick, easy and delicious? Now that's the real MVP. View Now
More recipe videos

Awkwafina Breaks A Sweat With Sean Evans On 'Hot Ones'

Golden Globe-winning actress, rapper and television host Awkwafina is adding something else to her plate: Hot wings! On the latest installment of First We Feast's "Hot Ones," Awkwafina chats with host Sean Evans about her new film Raya and the Last Dragon — all while eating insanely hot wings! View Now

A Look Back At Quarantine Trends With Brie Larson

This time last year, the world was rocked by the outbreak of COVID-19, resulting in most nations issuing stay-at-home orders. Almost an entire year later in 2021, unfortunately, things still aren't back to normal. View Now

Here at RTM, there are few things we love more than seeing two of our favorite YouTubers come together. We recently featured David Dobrik's brand new house, and keen-eyed viewers will remember his totally unnecessary, yet equally awesome, fruit punch drinking fountain — created by none other than Matty Benedetto of Unnecessary Inventions! View Now
More celebrity videos

Any day can become a special day when a favorite food is involved! When cooking a traditional Zambian meal for her family, Rachel Beyerle decided to surprise her husband Gabriel with his favorite vegetable from her home country. The vegetable, called ifisashi, is served with chicken stew and nshima. Gabriel was thrilled to have his favorite vegetable with such a delicious meal! View Now

Gelissa and Detric from The Wes Family are expecting a child... Detric just didn't know it yet. Gelissa had planned everything for the big reveal — she gathered loved ones, hired a photographer and had signs made. Then, she took her fiancé to a secret location and showed him the pregnancy test. Detric was stunned by the news, and after digesting the chaotic scene around him, he was thrilled! Since the surprise, the pair found out that they are having a baby boy due May 2021. View Now

After being together for eight years and engaged for three, the COVID-19 pandemic was the last thing long-distance couple Jeff and Beth wanted. The pandemic caused UK native Beth's visa process to slow to a crawl. After being apart for eight months, Beth's visa was finally approved. She decided to surprise Jeff with the news in person at Disney World, which is where they first met and got engaged. With a team of friends to help her, Beth surprised Jeff in front of the castle. His reaction to the magical reunion was priceless! View Now
More Love is in the Air videos