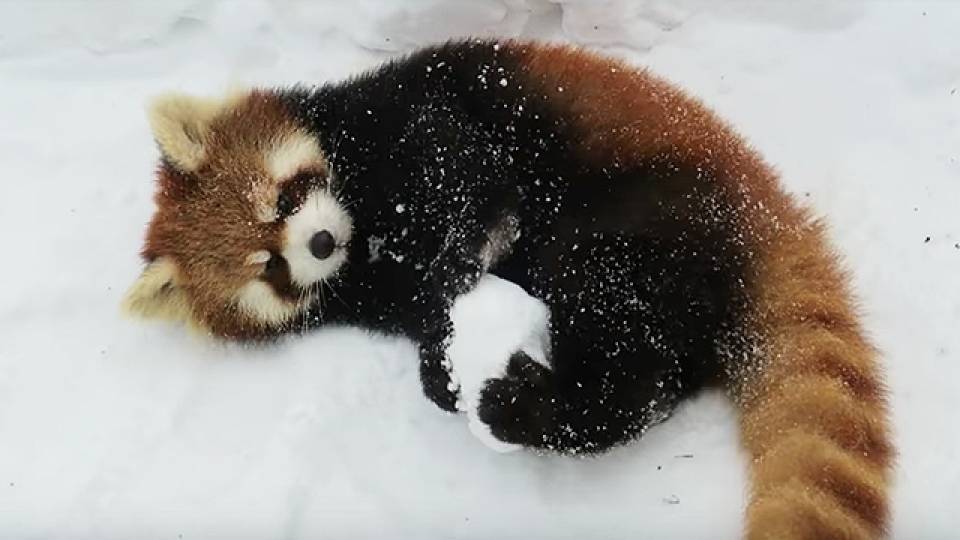 Have you seen the #CuteAnimalTweetOff on Twitter and trending on Facebook? Zoos across the country are hilariously trying to out do each other by posting the most adorable photos ever. Here's just a few of the animals capturing our hearts right now!

"Did someone say #cuteanimaltweetoff? I'm not much of a Twitter user, but I Yelp all the time." pic.twitter.com/YS56h6VK0h

I got here as fast as I could... #cuteanimaltweetoff pic.twitter.com/wPWHHoPaS1

We also love this funny tweet from the U.S. Army Reserve.

We'd like to submit our own cute critter, this Red Panda loving the snow and even making a snowball. We're dying inside over how sweet this is!

Dad is watching little Rush while he plays in the gym, and Mom is watching Dad while providing some pretty hilarious narration. But, when Rush runs after a ball directly behind a boy that's swinging, disaster almost strikes...until Dad saves the day! With some seriously impressive reflexes, he manages to swoop in and grab Rush in the nick of time — and Mom caught the whole thing on camera! Next, adorable little Baylor and Bentley are out playing in the front yard with their dad when a curious squirrel starts chasing them. Uh-oh...run Bentley, RUN! View Now

Brennan is no ordinary cat. Brennan has polydactyl, meaning he has an extra appendage on his paw. That's why Brennan's human Sheila says he has "Man Hands." And how does Brennan the cat use his man hands? Well, it isn't for good, if that's what you were thinking? He pretty much just trashes bathrooms and such. But who could stay mad at that face? Speaking of cats, Felix the cat (not the cartoon one) is setting a bad example for his brother, Captain the dog. Captain figures that if Felix can fit through the pet gate in the house, so can he! View Now

Safari goers out for a cruise in the Serengeti National Park got more than they bargained for when a curious cheetah hopped on top of their vehicle. It climbed up onto the vehicle's roof and, for a moment, looked like it was going to leap inside. Thankfully the cheetah went on its way without injuring anyone, but yikes! That encounter was a little too close if you ask us. View Now
More animal videos