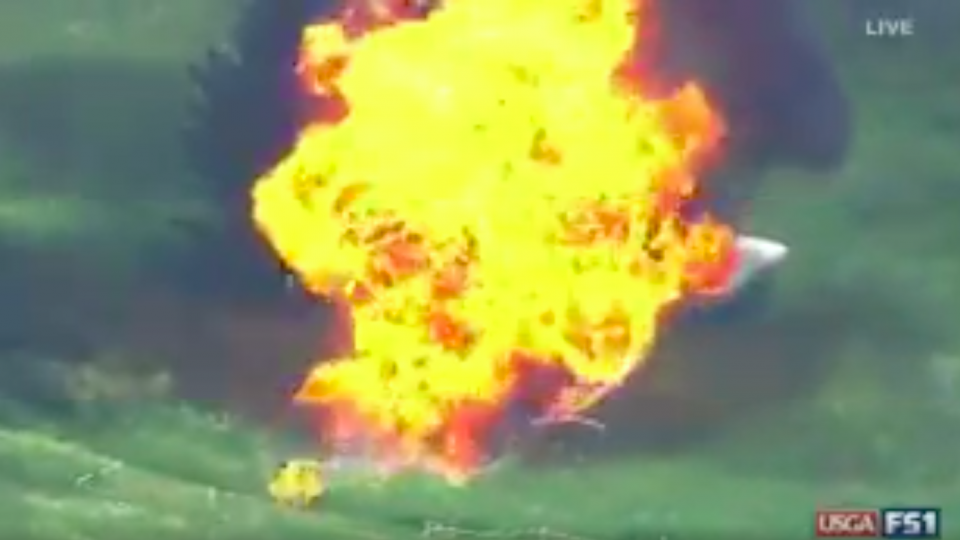 A pilot was injured after a blimp advertising the PenFed Credit Union crashed and caught fire at the U.S. Open in Erin, Wisconsin near Milwaukee. Local reports state that the blimp deflated before the crash. First responders were on the scene shortly after the crash. Footage shows the huge eruption of flames from the crash site.

Witness shared footage of the blimp before and after it crashed.

Blimp going down at #usopen pic.twitter.com/dZ1uMbgWiW

Just got to the #USOpen and the blimp caught fire and crashed. People parachuted out. pic.twitter.com/1lDi3VkXCu

Pretty sure I just watched the blimp crash at the #USOPEN! Hope everybody is ok! pic.twitter.com/OSOCSBF46p

A blimp unaffiliated with the #USOpen or @FOXSports has crashed near Erin Hills. Pilot was injured and first responders are on the scene.

The #Goodyearblimp was not at the #usopen and our crew members are all accounted for.

Our thoughts and prayers are with those who were injured.

Our thoughts and prayers also go out to all those affected by today's events.

The Martha Stewart channel is bringing us a creative way to elevate your pet's sleeping experience. Grab a charming-looking suitcase, add some legs and bedding, then voila! You've got a bed fit for your furry little king or queen. View Now

Moose On The Loose! & Knock Knock, Who's Deer?

Erik Stark is hitting the slopes in Sweden when he's suddenly overtaken by...a moose? Well, we definitely didn't see that one coming. That moose is on a mission! Next, this doorbell camera footage from Washington is pure gold. A deer is casually munching on some birdseed laid out on the doorstep of this home. But, this isn't the first time the adorable guest has visited the residence. No matter where the homeowners put the birdseed, this deer is never far behind! View Now
More animal videos