Why Yes That's A Skateboarding Bulldog 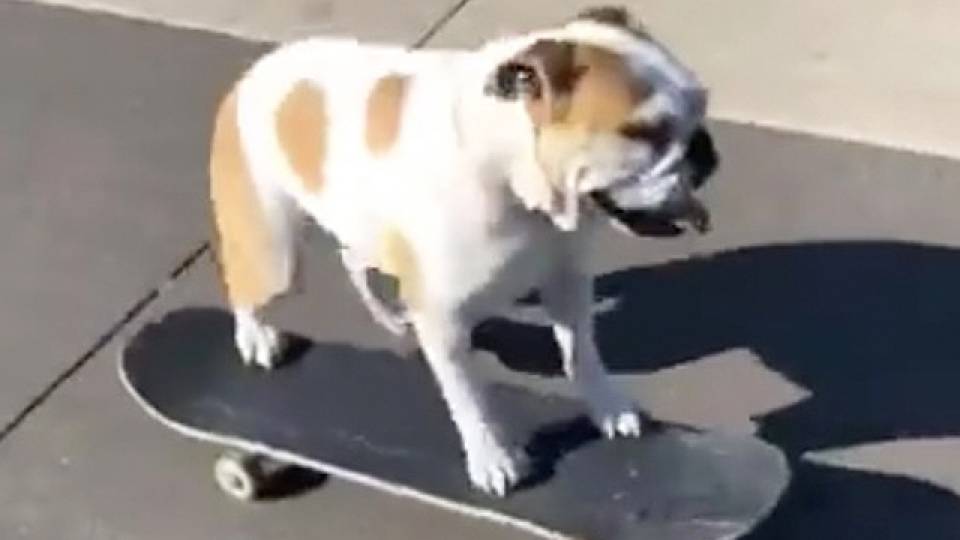 When Taryn Arnold saw this miraculous feat, she just couldn't believe it! A bulldog absolutely excelling at skateboarding, putting all of us humans to shame. The pooch had chased after a skateboard and STOLE it just so he could ride it himself!

i cannot believe the miracle i just witnessed - this dog just chased down a skateboarder until he stopped and the owner ran over - “SO sorry, he honestly just loves skateboards” AND THEN HE DID THIS: pic.twitter.com/26mhKpFeta

Curious to know exactly who this superstar was, Taryn got the scoop. The dog is named Rey and was just adopted in May.

Hai. Im Rey. Thanks for being my friend . Making people and doggos happy makes me happy. Also treats. Also snugs. Also skateboards. My mahm and Dahd got me from a shelter cuz my breeder said my heart was bad and dat I wouldn’t live long. Like patentductusarteriosus or something dumb like dat. But I’m pretty tough so I like fixed it it was pretty easy and now I’m gonna live like a really long time. I adopted my parents on Star Wars day so they thought they’d name me after another pretty tough orphan Jedi gurl. I wanted Darth Dragonmaster 3000 but they said no. Whatever  There’s many more badass snuggle chunks looking for a chance with a family just like I was so like maybe go check dem out! @norcalbulldogrescue Ok well I’m gonna go snore in my mahm’s ear now and not let dem move me to da bottom of da bed but I’ll share more skating videos soon kbai #shelterdogs #rescuedogs #rescuedogsrock #rescuedogsofinstagram #bulldoglife

A post shared by Rey the Bulldog (@hai_im_rey) on

In the end, Taryn came to this conclusion.

also from what i’ve gathered, here’s my conclusion on why bulldogs love to skateboard:
-they have low center of gravity
-they’re really heavy AND lazy, so this helps them get around
-they known for a lifelong adoration of @tonyhawk

We're definitely all for Rey showing us up! Go dog!